My article on Turkey Red wheat provenance, which discusses what I learned in the 2015-2016 season on the test plot, was published in Rural Heritage this month.  Click here to read Part 1 online.  Part 2 is in the April issue. 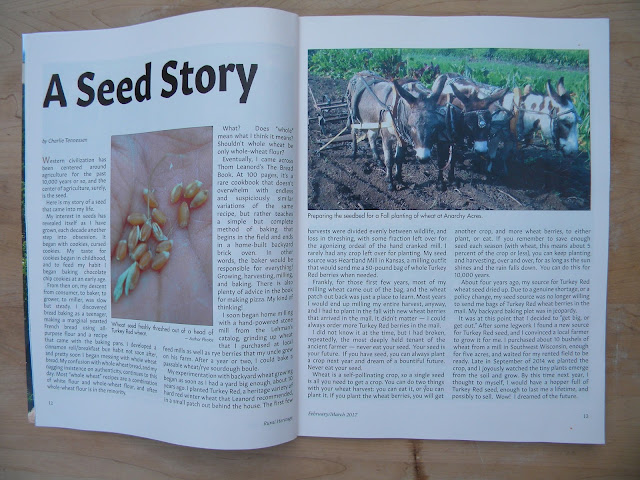 Posted by Charlie at 1:33 PM No comments:

Wheat in the test plot

The Bacska really looks dead!  I'll be very interested to see how it fairs.  I took the below photos to record their appearance in the field this week.

Posted by Charlie at 2:08 PM No comments:

I started a spring wheat planting test today.   I understand from different sources that spring wheat should be planted as early as possible, period.  So I plan to keep drilling in a row of wheat as often as I can, hopefully every 1-2 weeks, from now until Spring.  I am using the South side of the hoop house, and today I was able to drill in a single row with the earthway.  It's Marquis, btw.  The ground was complete mud but it opened up just fine.  There is a pink flag marking the row. 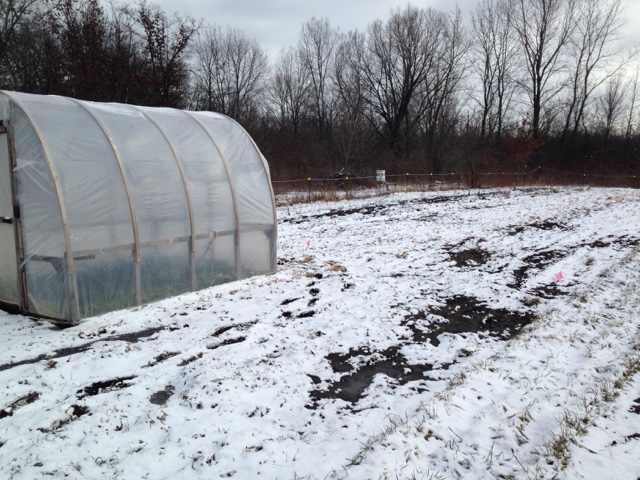 Email ThisBlogThis!Share to TwitterShare to FacebookShare to Pinterest
Labels: Wheat

We've had a pretty remarkable warmup in mid-January.  Starting around the 17th or so it went above freezing and stayed there for the next week, at least.  One of the nights set a record for the "highest overnight low."  I think all of the frost came out of the ground.  Here is what things looked like. 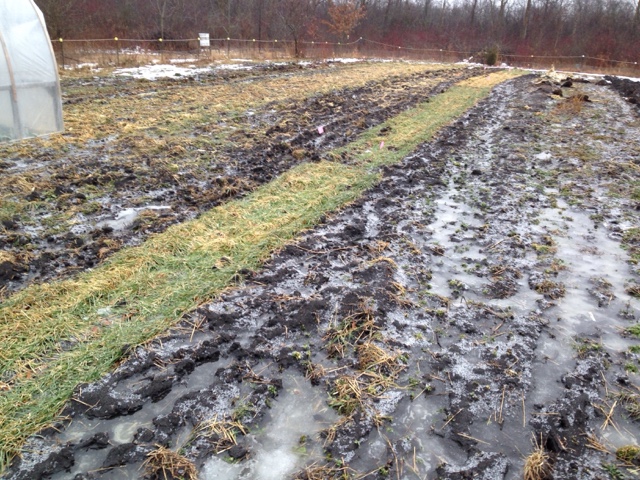 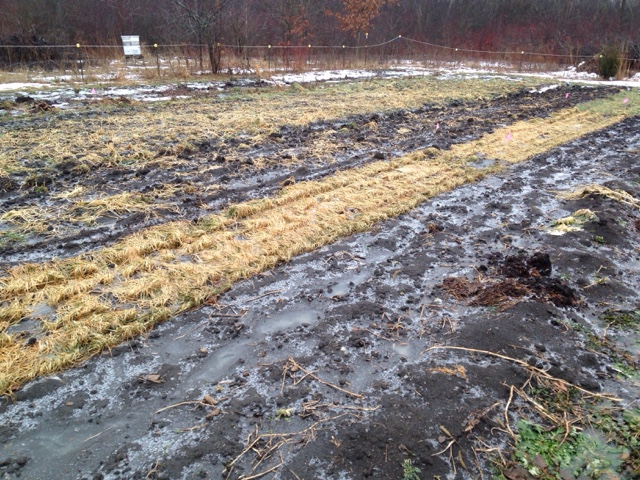 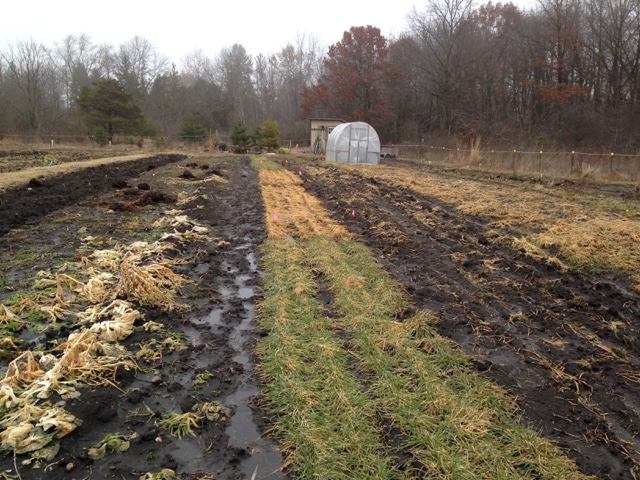 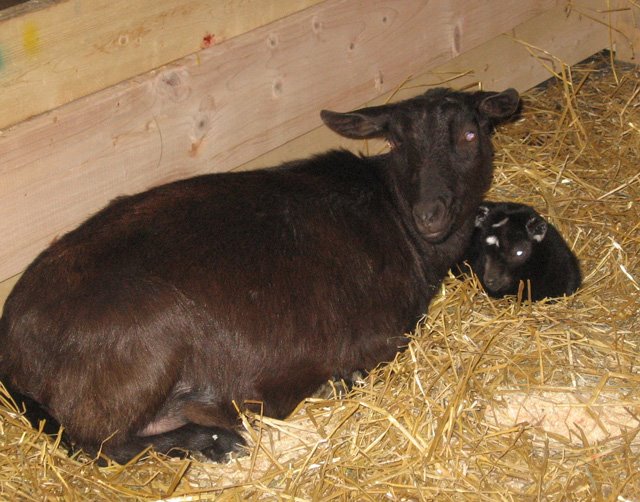 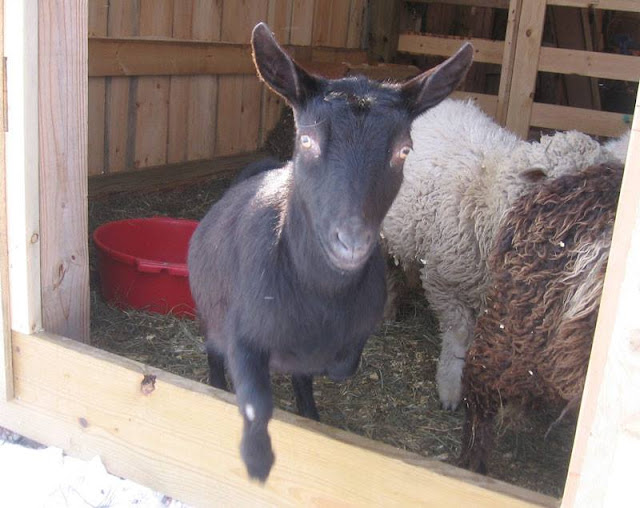 I had to say good bye to a good friend in the barn last week.  Anabelle, a sweet goat who came to the farm in 2006, did not come to breakfast on Wednesday, January 11.  Her death was not unexpected, but I was amazed by how it affected me.

She was showing her age over the summer already, and frankly I did not know if she'd make it through the winter.  Every morning I'd feign surprise at her when she was still alive and active, which is exactly the kind of defense mechanism a person like me uses when he doesn't want to get too emotional.

She was peacefully laid out in her regular sleeping spot, in a stall where all the goats and sheep sleep at night.  I don't always close the door on winter nights, but this year I've been closing it more and more to help shelter Anabelle and Wilhelm, who is also in his last years or months.  During the last cold snap I found Anabelle shivering.  Since that time I doubled hay rations to the goats and sheep to help her.  It's not a matter of saving hay--I have more than enough.  Just trying to balance nutrition and keep everyone from getting too fat.  It's always hard when you have some easy keepers in the same herd as some hard gainers.  Aanabelle actually looked to be fairly overweight, like she has since having Jasmine and Julia.  She's always been as wide as a house.

I was grateful that she died in a dry stall, quietly surrounded by the sheep, her two daughters, and Wilhelm.  I could not linger, but I dragged her out behind the barn and hurried to the Y to teach yoga.  Poor Jasmine sniffed at her body a couple times and looked confused.  I felt bad for abandoning Ana but had to go work for a few hours before I could get back and attend to her burial.  I put an old coat under her head where I laid her down.

Animals understand death, but exactly how is a mystery.  Cassie stared at Anabelle's body and snorted repeatedly.  The goats and sheep kept looking at her like they expected her to get up.

Digging her grave was 90 minutes of extreme digging.  The frost was unusually hard and would hardly budge.  Too late I discovered that the slide hammer log splitter works much better than a pickaxe to bust through the frost.  Once the frost has been penetrated, digging goes very quick.  Nevertheless, I was dirty, sweating, and exhausted by the time I finished.

I laid her in the ground and placed a shock of heritage wheat from the garden under her head, then added some prime red clover hay for good measure.  I was a bawling, emotional mess and could hardly move the dirt to cover her up.  I hoped nobody could see me.  She rests about 30 feet behind the barn, in a grove of black walnut trees between the barn and the compost pile.  I'll miss her and probably never forget her, and I'll never know why she affected me this way.  But I'm grateful for all the time we spent together.  I sure wish she could have made it to the Spring, to munch on some fresh clover or honeysuckle again.

After I was done laying her to rest, I went to feed the animals.  Wilhelm, whom I had let out of the mud lot along with the other goats and sheep, had found a terrible slick section of ice and was totally splayed out, helpless.  I pulled him to his feet and he immediately went down again.  He did not look to good, having been stuck on ice for at least an hour like this.  I went to get my spiked boots and dragged him over to some better footing.  I dragged him to his feet again and guided him to the barn, wondering if he was going to make it.  I got him to eat some food and settle into the stall.

The next day I trimmed his feet, thinking that might help his balance on ice.  On his left hind I was not paying attention and cut him to the quick, badly.  I tied a padded knee wrap that was meant for a horse around his hoof and it seemed to stay there.  Over the course of the next couple of hours I checked on it.  An Internet search recommended packing flour into the wound to staunch the bleeding.  This kind of cut is notoriously hard to clot.  Anyhow, some Marquis wheat flour and vet wrap worked wonders on his hoof.

There is a warm stretch of weather now and I think I will worm everyone.  Poor Wilhelm needs all the help he can get to keep weight on.  I also give him wheat berries twice a day and I got him one of those protein blocks to munch on.  I hope he shines up and stays on the farm for another season.

Posted by Charlie at 8:26 PM No comments: