I agreed to trim a miniature donkey's hooves last week.  Sammy is a very pleasant mini but unfortunately he had gotten very heavy and his feet were allowed to grow very very long.  The last time he was trimmed he kept falling down and as a result his owner is wary of removing too much hoof all at once.  My plan to keep everyone comfortable is to reduce the hoof over the course of 1-2 months.  If this were my own donkey, I would do it all at once, or at least do more work early on.

Anyway, the below picture shows Sammy's front hooves before I started working on them.  His rear hooves are in need of a trim, but are in a manageable range.  Apparently, they were trimmed a few months ago but the fronts were not done at that time.

I went back 3 days later and took even more off.  FWIW, he is clearly carrying his pastern in a more normal position even after the first trim, so I feel this is doing him some good now.  As long as I am taking off more than is going to grow back on I feel like I will win this battle.


I did Sammy's third trim on June 15, a full month into this.  I am finally getting down into semi-normal hoof that I can pare down with my knife when I get tired of rasping.  You can see at the toe that the whole thing is weirdly hollow and we are still months away from the toe really touching the ground properly.  The white at the toe is just old sole and laminae.  You can see I am both backing up the toe and removing some flare at this point.


Sammy was moving around more this time and I took credit for this change.  This donkey has suspected neurological issues but as a hoof trimmer I really believe all he needs is good feet to move around on and his other problems will go away.  At his new home he is being turned out with horses which is a great step forward to keep him moving and socialize and strengthen him again.

The heel bulbs weirdly are very healthy and go all the way to the ground.  They were originally several inches long.  I trimmed them just to get them out of the way while I rasped down the heels, but they are still in good contact with the ground.
BTW, I have heard people say that this slipper hoof condition is caused by the heel growing faster than the toe.  Peter Ramey even blames slipper hoof on this conjecture about uneven hoof wall growth.  Based on my survey of information and anecdotes, I do not believe this is the case.  I think Sammy's growth is perfectly normal, and that his heel growth is just fine.  The distortion is just being caused by continued hoof growth without movement and regular trimming.  True, many animals, especially horses, can go years and years without a trim and not show this kind of condition.  But I think in that case the hoof wall is thin enough, relative to the overall animal, that it ultimately breaks off and self trims before reaching this stage.  I think donkeys and ponies are basically growing such thick hoof wall (relative to their size) that they are all at risk of slipper hoof in a way that a horse or larger donkey is not at risk for.  The type of footing and movement would also be contributing factors.  At any rate, this is the thinking that is guiding me right now.  This is a normal hoof that is on an animal who isn't moving enough, and who hasn't been trimmed enough.  I won't know for sure until I have been around for at least one full cycle of growth after getting the trim under control.

Here are the fronts after a trim on July 27.  In retrospect I think I could have taken them further down. 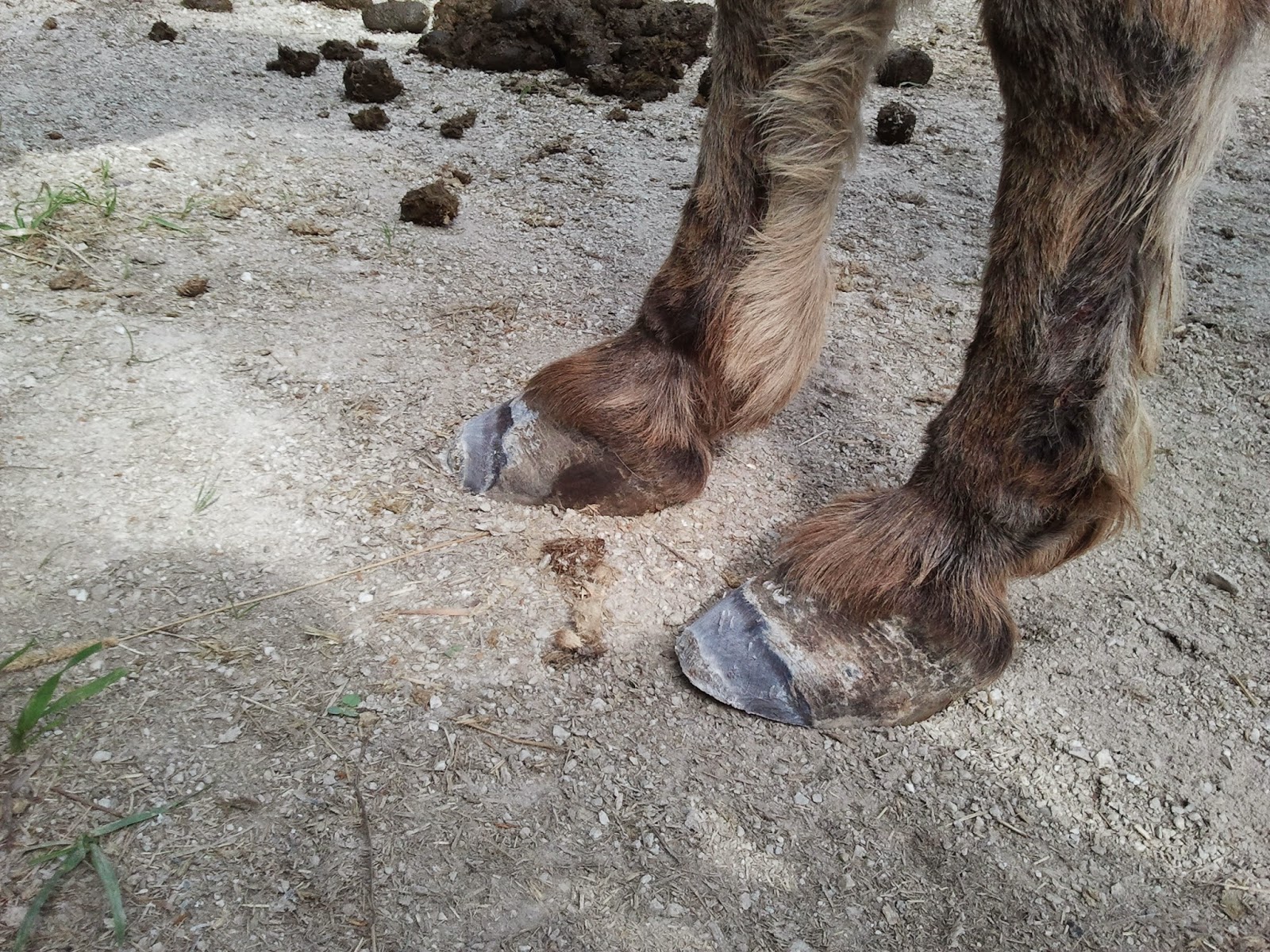 Here is Sammy after a trim on October 25. He finally has a halfway normal sole and some straight growth. I am kicking myself for not doing this trim a month earlier though. At any rate it was a joy to see him moving and running away from me when I arrived for the trim. He looks so much better now! 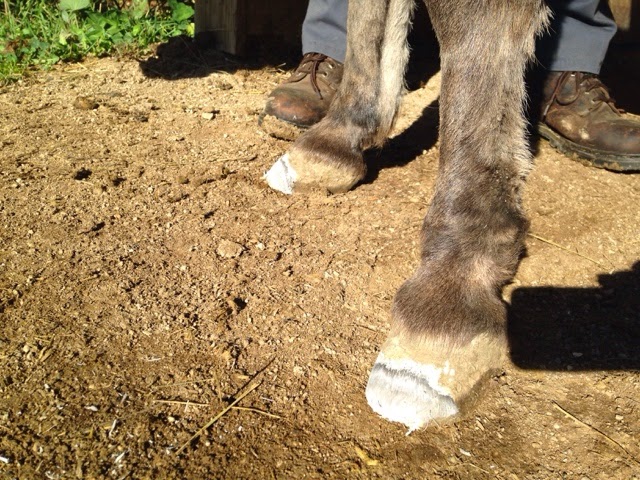 Posted by Charlie at 6:51 PM No comments: